RM Auctions sold an amazing piece of Miller racing history, from the Crawford Auto Aviation Museum, a collection of the Western Reserve Historical Society. Sold for $310,500 was an extremely rare and desirable 1928 Front Wheel Drive Miller 91 Engine, no. 20. 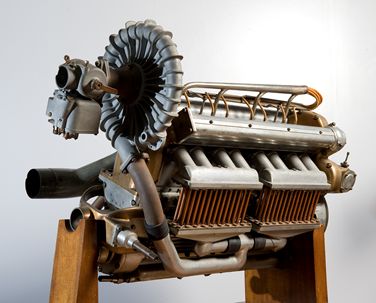 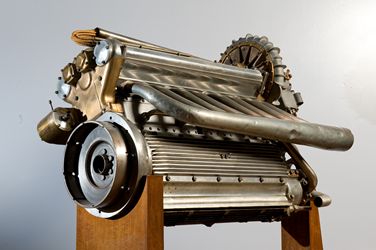 Racing legend Harry Miller did not become involved in motorsports until he was in his thirties. His first assignment at the Olds Motor Works in Lansing, Michigan was to prepare the Oldsmobile entry for the 1906 Vanderbilt Cup, Americas most prestigious racing event of the era. Due to a series of mishaps, the car didnt finish and Miller was convinced he could build a better engine. He returned to California to open his own shop in 1908. At first, he built only carburetors, not building a complete engine until 1914: an aircraft engine, at that. Miller Racing began by rebuilding a Peugeot for the 1915 Indianapolis 500. While in Los Angeles, he would associate himself with other visionaries who shared his interest in racing  Leo Goossen, Eddie Offutt, Fred Offenhauser, Ed Winfield and Barney Oldfield, among many others.

Late in 1924, Miller would build his first two Indy front drive engines, each with 122 cubic inch displacement. Thanks to a rule change the following year, the maximum displacement was reduced to 91 cubic inches. Though rear-wheel drive was standard for racing cars of the time, the innovative Millers used front-wheel drive and were among the fastest cars of that era. In 1926, the two Millers entered at Indianapolis qualified on pole and in fourth position. In 1927, three qualified second, third and fourth. And in both 1928 and 1929, they qualified one, two and three. Amazing achievements, to be sure!

This Miller engine has an amazing story. Originally owned by the Mike Boyle racing team, Boyle driver, Fred Comer, constructed a unique and unusual intercooler of 72 half-inch copper tubes, each approximately nine inches long, for the engine. It was given to Mr. Crawford in the 1930s at which time it was obsolete for racing, save for the fact that it could have been cut in two and used as the basis for a four cylinder midget race car engine. Fortunately, Mr. Crawford kept it looking like it could have been pulled out of a race car and saved it for future museum display.  It was prominently displayed at the Thompson Auto Album from the late 1940s through early 1960s before gifted to the Western Reserve Historical Society by Mr. Crawford in 1964. It has now been part of the collection for over 70 years. While the exact history of this particular engine has not been previously researched, it can be stated with certainty that the unique intercooler is the one Fred Comer designed, built and installed on the Mike Boyle owned front drive he drove in 1928. The 91 front drive engine underwent numerous design and engineering changes by Miller during the five years it was built.

This engine features some interesting components. The crankcase sideplates are of the one-piece, full-length finned style developed by Earl DeVore to strengthen the crankcase. The supercharger is the larger nine-inch version driven off of the crankshaft by a train of spur gears in a bronze housing. It is located at the front of the engine, placing it in the cowl of the car as opposed to the other supercharger location found on 91 Front Drives, which placed the supercharger at the back of the engine, directly behind the radiator and susceptible to heat. Also of great interest is the gear tower where bronze castings have been utilized instead of the standard aluminum parts.

It is arguably one of the most important Miller artifacts to come in the market in decades having been in single ownership since the 1930s.The opportunity to purchase an eight cylinder Miller engine has always been a rare occurrence, and this opportunity has some special circumstances. Not only has this engine never been available to Miller enthusiasts, but its very existence was unknown except to a very few. Certainly this is the most important Miller artifact to surface in decades.

Link to the RM Auction site